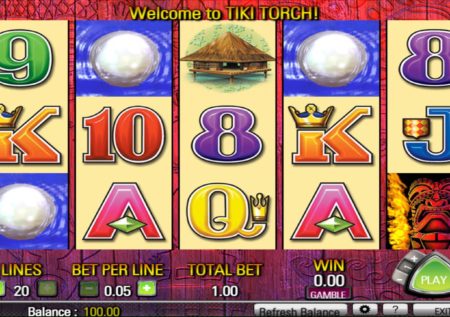 The Tiki Torch is one of Aristocrat Technology’s oldest games that was released online in November 2012. The online game closely resembles the offline one and packs all of Aristocrat’s well known features – the familiar Aristocrat sounds, bells that ring when a feature is hit and its characteristic clicky reels.

The Tiki Torch slot machine takes you on an exotic hunt for the Tiki Torches. Symbols include a Knife, a Hut, a Canoe, a Pearl, an Ace, a Jack, King, Queen and the numbers 8, 9 and 10.

The Tiki Torch sports 5×5 reels and has three symbols per reel. The game provides 20 lines where you can purchase one line with one credit. You can choose to play on any number of lines from one to 20, but with only one credit per line, playing all 20 lines comes across as a fair deal.

On spinning up three or more Pearl scatter symbols anywhere on the reels, you are awarded a multiplier that increases your wins between 2x and 50x.

The Tiki Torch slot machine boasts a high return to player percentage, in line with other Aussie slot machines by the slot manufacturing giant Aristocrat Technology. The game has a return to player of 94.85 percent and uses the same gameplay for free and real money versions.

The game provides many opportunities of winning big and therefore playing with real money should be considered if you are familiar with the game already.

Basic Features of the Game

Players can access the Tiki Torch slot machine in Real Money Mode or Free Play, making it a great game for both rookies and experts alike. Players who aren’t too comfortable with wagering real money can first learn a few tips and tricks while familiarising themselves with the functions on the free version before putting their money on the line. Since players have now come to expect high-quality standards from Aristocrat Technologies, the company continues to incorporate advanced technologies to create the perfect product, and the Tiki Torch slot machine definitely delivers the goods.

The Tiki Torch slot machine comes with five reels and 20 paylines. You will be taken on a glamorous treasure hunt where you will have to find the Tiki Torches. Players will find that navigating the Tiki Torch slot machine is fairly easy owing to its simple design. The animations are also easy on the eyes as they aren’t too bright of flashy. Red is the primary colour you will notice on the reels, but a few spurts of hue here and there make for appealing visuals.

The symbols in the Tiki Torch slot machine include a Hut, a Knife, a Pearl, a Canoe, and high-value playing cards such as Eight, Nine, Ten, Jack, Queen, King, and Ace. Players can wager a minimum of one credit per line. To engage in real money gambling on the Tiki Torch slot machine, players will simply have to choose their betting amount and select the number of paylines they wish to activate before hitting the “Spin” button in anticipation of rewards.

Bonus Rounds in the Game

The Tiki Torch is especially celebrated for its bonus round with the free spins bonus feature. Every time you manage to hit three or more Pearl scatter symbols in line, you get eight free spins.

What’s so great about the bonus feature then, you ask? The answer lies in the amount of extra wilds you get in the course of the eight free spins.

The bonus round however, can be rather tricky to trigger. You need to hit at least three scatter symbols in view and they must fall in line. For instance, say you have four Pearl symbols in view. Unless they fall on the first four reels, the free spins bonus feature will not get triggered.

Considering how most games sport easily triggered bonus features where a winning combination is made if symbols fall anywhere in view and not necessarily one after the other, the Tiki Torch slot machine more than makes up for its difficulty with the extra wilds.

During each of the eight free spins, all picture symbols in view, turn into the Tiki Torch wild which essentially means you win in every spin. These symbols includes the canoe, the hut and the boat – just about all symbols other than 8, 9 and 10. Further, you can re-trigger the free spins bonus feature any time you hit 3+ scatter symbols adjoining each other.

This special bonus round more than makes up for the tricky trigger requirement. Don’t be surprised if your winnings get multiplied more than 100x during the free spins bonus feature.

The Tiki Torch slot game is compatible with iPhones and can be downloaded as a free to use app from iTunes.

The Tiki Torch logo is the wild icon in this game. It can replace any other symbol except the scatter. Wild symbols appear quite frequently during the base game, but large winnings are paid out only when five of these icons appear adjacent to each other. The Free Spins feature in the Tiki Torch slots game can be activated when at least three wild icons appear on the reels.

The scatter symbol in the Tiki Torch slot machine is the Pearl icon. If players are lucky, this symbol will deliver almost eight free spins during the bonus round in addition to a 50x multiplier. Similar to the wild symbol, the scatter also appears often and payouts are awarded when five icons are hit consecutively. If you land at least three scatter icons anywhere on your reels, you will receive a multiplier ranging from 2x to 50x, thus significantly enhancing your winnings.

One of the reasons why Tiki Torch has attracted a large amount of interest from players across the world is down to the fact that it is one of the best-paying games to be designed by Aristocrat Technologies. Promising a return of 94.85 per cent, there is no surprise that the game has become a favourite of rookie and expert bettors alike. Along with catchy sound effects and attractive visuals, players can look forward to an intriguing and adventurous time whilst engaging in the Tiki Torch slots game.