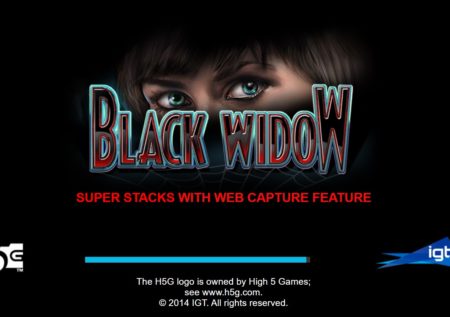 Black Widow online video slot game, developed by IGT, is a 5-reel slot machine with a fixed 40 lines. This game is entertaining and offers a ton of unique features not found in many other games including the web capture feature and the super stacks feature. Black Widow the slot game is Mac-friendly and mobile-friendly and is available on the IGT mobile app for phones that make playing this and other IGT games more accessible wherever you are. Black Widow is a crossover slot from High 5 Games.

The main character of the Black Widow slot is a black widow, but she’s not a spider. In fact, the only references to spiders in this slot are the spider webs that adorn the gaming interface. There are no actual spiders pictured in the game. The background of the game is a brown floral design with spider webs in the background and around the spin button. The symbols of the game include the Black Widow logo symbol, the Black Widow, her various male victims, and the typical Ace, King, Queen, Jack, and 10 card symbols. The highest paying symbol is the Black Widow logo which is the wild symbol. The wild symbol is capable of substituting for any symbols except the bonus symbol.

One thing that is not typical of IGT slots is extra features outside of the stacked wilds and free spins. However, once in a while, the brand will surprise us and introduce new and innovative features. Such is the case of the Black Widow slot. One of the most notable features in this game is the super stacks feature. At the start of each spin, a stack of symbols are presented on the reels. These symbols will ultimately turn into the same symbol to create payouts.

Another high paying feature in Black Widow is the web capture feature. When a player “captures” the female symbol on reel 3 in the middle, then the pay is awarded upon the value of the 3 meters for that spin. It can also increase in payout all the way up to 13 increases per meter per bonus. There are 3 male symbols that can be “captured” as well in the middle reel. It also pays the value of that meter and can increase up to 13 times per meter per bonus, as well. The values of this meter can be from 2 to 1,000 times the total of the triggering bet.

While these features aren’t easy to trigger, they do payout well when they do hit.

The bonus symbol will only appear on reels 2, 3, and 4. To trigger the free spins bonus round, the bonus symbol must be present on all three center reels. When it is triggered the player is awarded 7 free spins. Free spins can be retriggered during free spins mode, up to 98 free spins allowed.

Black Widow is a unique game with an intriguing, yet twisted theme nonetheless, with high paying and innovative features that you don’t see every day. If you are looking for a game with high payouts and a different set of features than are available in most other games, then IGT’s Black Widow slot would be a good option for you. Furthermore, if you like fast and frequent payouts as opposed to infrequent but large payouts, you might get bored playing Black Widow. Other slots by IGT include Bitten and Cluedo.