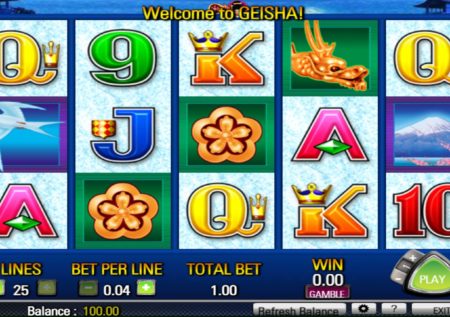 Aristocrat Technologies Inc’s Geisha mobile game is a highly engaging mobile application available for all iOS users on iPhone mobile devices. The game demonstrates the 60-year experience of Aristocrat Technologies and its reputation as a leading technology provider for mobile based slot game applications. The enchanted slot game Geisha has captured the interest of many mobile slot enthusiasts and is considered as one of the best slot games for mobiles, worldwide. Aristocrat Technologies has made this game available for free through the App Store and if you are interested in playing for real money, you can do that as well, through any of the leading real money online casinos.

The Geisha slot game is an original creation from Aristocrat Technologies and includes 20 paylines in five reels. The game is quite different compared to the regular slot games and is a colorful yet fun-filled adventure with excellent graphics. The theme of the game is based on the mystical land of Geisha where colorful birds sing all day and dragons roam the land freely. The game also includes a pretty lotus flower that captures the player’s attention as it blooms. The introduction also includes a beautiful Geisha waiting for you while fanning herself gently with the mountains in the background..

The most interesting feature of the slot game Geisha is perhaps the animation for every win. The game includes an animation for every spin that you win. In addition to this, the Geisha will also guide every player through the game by substituting the symbols automatically. However, the Geisha will not substitute for the gateway symbol, instead the substitute doubles the reward whenever the gateway symbol appears on the payline. In addition to this, you can also win several bonus rounds throughout the game even with the lesser number of paylines, unlike BetSoft’s Boomanji, which as 10 paylines and no bonus rounds of any sort. Every time you hit three or more gateway symbols on a single payline, you stand a chance at winning as many as 15 free spins. Five for three gateways, 10 for four gateways and 15 for five gateways.

The gateway free spin bonus in the game also includes a multiplier that triples all the winnings during the free games bonus round. Another interesting feature of the game includes the chance of winning additional free bonus spins within a free spin. This can take place if you hit three or more gateway symbols when playing for free spins. These additional free spins also include a triple multiplier like the normal free spins. However, the payouts in the game are quite low when playing for free, as the free version is meant only for amusement.

Aristocrat Technologies last updated their game early in 2011 and it consumes about 13MB of space on your memory. The real money version of the game is available at an affordable $1.66 in the App Store. However, the players have been constantly facing problems with the game despite its excellent graphics and innovative free spin bonuses. Many first generation iOS users have been found to be facing several issues with the compatibility of the game, which is not something any slot enthusiast would have ever expected from Aristocrat Technologies.

Aristocrat Technologies has promised all the users that they would be rectifying the compatibility issues as soon as possible and has also initiated a new version of the game that is meant to replace the current version, while getting rid of all the compatibility issues. The new version is currently being reviewed by Apple developers for approval and may hit the App Store any time soon. Aristocrat Technologies takes pride in their high quality user experience and have requested all users with first generation iOS devices to watch their website for news pertaining to the new version of the game.

Aristocrat Technologies has prepared strict download policies to discourage any under-aged minor from playing the game and from gambling. As a result only those players who are aged 21 or above are allowed to download the game from Aristocrat’s sites or the App Store, even if you are downloading the free version of the game. In addition to this, Geisha may also not be available everywhere depending on local regulations pertaining to the legal age for gambling and other technical reasons. Also, Aristocrat Technologies has also not released the game in some countries such as Australia.