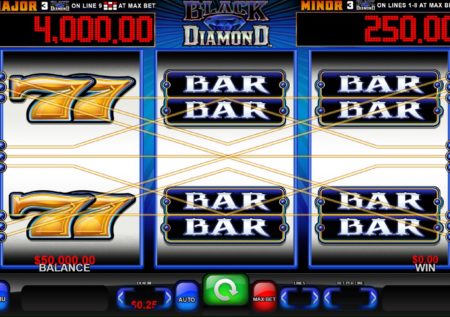 There are slots on the market that bombard you with flashy animations, sounds, and all sorts of bonus features, and there are also those that are stripped down to the essentials, offering nothing more than what players really want – good payouts. The Black Diamond Slot game from Texas-based game providers Everi is a proud member of the second group, offering simple gameplay but with just the right amount of extras. Built like a Vegas-hall mechanic machine, this particular slot is a game for both traditional punters as well as anyone else looking to scoop some major prizes.

Visually, the game is meant to replicate the feeling of playing a classic one-armed bandit with mechanical reels. But while some slot makers have gone to great lengths to wrap that traditional look in a more modern and eye-pleasing package, this slot makes you feel like Everi’s design studio wasn’t really focusing on aesthetics when making the game but more on the features incorporated in it. The end result, thus, is a very simple-looking slot that doesn’t really compare well with some of its online counterparts. However, this is only natural, as the game was initially built for land-based machines and not for the competitive online slot market.

In line with its concept, the Black Diamond is built like a 3-reel slot machine and comes with only 9 active paylines that you can choose to bet on or not. The reels are full of familiar symbols like 7s, BARs, and diamonds and they do a great job at simulating the look of mechanical reels spinning. And to really convince you that you aren’t just playing a digital slot game, the machine plays basic quiz-like sounds during your spins and alarm bells when you hit a payout.

Like some older online casino slot machines, the Black Diamond lets you tweak your bets to the fullest. The lowest coin denomination available in the game is 0.25 credits, but since you always play 4 coins per line, even when you activate only 1 payline you will end up with a lowest possible bet of 1 credit. If you want to have a shot at winning those jackpot prizes, you will need to pay the max bet which is 27 credits. With an RTP of 95.95% and some huge prizes waiting on the reels, you might just be tempted into paying as much.

No matter whether you want to play for the jackpot or not, you can still win solid prizes by landing one of the higher-paying symbols in the game. The top 2 symbols are your blue triple sevens (777) and gold double sevens (77), which pay out 300x and 150x your bet per line, respectively, if they fall on an active payline. The second-best are your red 7s and double BAR symbols, which pay 90x and 60x prizes. You can also win a payout of 30x if you collect any 3 7s (blue 777, gold 77, and red 7) as well as three BARs during a spin. The lowest bet, on the other hand, is given when you get a mixed combination of BARs and it only pays 9x your line bet.

Another special feature in the game is the black diamond symbol which is the wild card but can also be a trigger for the progressive jackpot prizes. If you’re not betting the maximum bet, the black diamond will only act as a wild symbol and substitute any other symbol except for the multipliers. It will also pay out a prize of 300-5,000 credits if you collect 3 of it on an active payline, the prize depending on the payline that brought the win. But if you bet fully, it can also trigger the Minor or Major jackpot prize. Collecting 3 black diamonds on lines 1-8 will get you the smaller jackpot prize while collecting all 3 on payline 9 will award you the biggest cash-out.

Test Before You Spend

Luckily, if you want to test this classic slot machine before you bet any of your real cash on it, you can easily do so by using our free Black Diamond slot here on this page. When you play for free, there is no difference in terms of the betting limits, the game’s pay table, or the machine’s volatility. Thus, if you want to get an exact feel of how the game will react when played with real money, a game demo is your best friend.

However, if you want to win those big cash prizes for real, you will have to do so at a real money online casino. If you haven’t played at a real money casino before, it’s important to make sure that the operator you choose has an official gaming license as well as the right tools to protect your online privacy and security. Fair withdrawal terms and good player rewards are also a factor worth considering when choosing as well as the level of support you can get from the casino’s staff. For more on how and where to find a suitable operator, feel free to take a look at our guide to playing real money pokies.

The Black Diamond is only one game in a bigger collection of classic Vegas-inspired slot machines Everi has produced that share many similarities with each other. It is basically the same game as the Double Leopard slot made by the company, which features the same 3-reel, 9-line layout and a special double leopard symbol that acts as a wild as well as a trigger for the game’s jackpot prize. The only difference is that it comes with exotic cats instead of diamonds and a prize that isn’t progressively pooled.

Another cat-themed slot that is almost an exact clone of the Black Diamond is the Super Jackpot Double Lion video slot, which can likewise be found in land-based casinos.  The SJ Double Lion is also a classic 3-reel slot game with 9 paylines that features a special double lion wild symbol. However, unlike the Black Diamond, this slot game has 3 different special cat symbols you can combine to trigger the progressive jackpot prizes. Thus, if you were looking for a similar slot but with some more exciting gameplay, you might want to give this classic slot machine a look.

Ready to Get Rich?

The bottom line is that Black Diamond is a traditional machine with worthy extras that will appeal to anyone looking for a straightforward slot game without any flash video effects, confusing side-games, or too many lines to follow/ And with a progressive jackpot that may not be as high as with some of Microgaming’s and NetEnt’s slots but is still high enough to add some serious coins to your budget, there are even more incentives to make you give it a try.