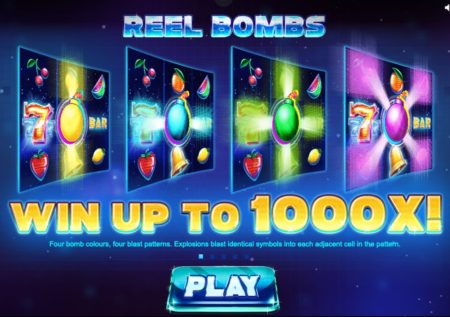 Most players do not need any excuse to start betting, and sometimes sticking to a classic theme is the best thing you can do to attract new customers.

The developers at Red Tiger Gaming have understood that very well and created Arcade Bomb, a video slot game with a classic arcade theme and an addictive gameplay. Use the bombs on the screen to work your way to the jackpot and make the less valuable symbols explode in the process.

Let’s discover what makes Arcade Bomb unique together and how much money you could win on the reels of the game in our complete review.

Arcade Bomb is taking players on a trip down memory lane to experience the original, old-school arcade atmosphere that many have enjoyed in the past.

The game was designed to look like an actual slot machine, with a dark background reminiscent of outer space. The transparent reels are curved and the command buttons hidden in a separate menu to give the game a modern look after all.

Arcade Bomb blends old and new but bets on nostalgia and simple graphic features. This is a potentially efficient strategy to attract a large audience, but we will need to look at the gameplay to see whether or not the game has what it takes to convince players to stick around a little longer.

Ready to Spot the Bomb

Arcade Bomb is a very player-friendly game, with few rules to follow and an intuitive game menu that will let beginners get started fast, as we will see in this section.

The game features 5 reels and 20 fixed paylines, where symbol combinations can trigger cash prizes. The plus and minus buttons right under the reels will help you choose a wager to place on the reels. Click on the spin button to get the game started once you are ready to go.

The cash rewards that you can score while playing Arcade Bomb are based on the combinations that you score and the size of your current wager. More money on the reels implies larger potential rewards down the line. Adjust your settings to change your current strategy as often as you wish.

Arcade Bomb also includes an autospin game mode, which allows the reels to spin on their own for a while. Your bet settings will be saved and applied throughout, visibly increasing the speed of the game.

The paytable of Arcade Bomb is filled with classic symbols taken directly from vintage slot games. Only familiar faces that most players have encountered before, and associated with different cash prizes. Let’s take a look at them with a one-credit bet as a point of reference.

The cherries, lemons, oranges, strawberries and watermelons are the most common icons of the game. Worth between 5 and 50 credits, they will give you many occasions to score some modest wins early in the game to get you started properly.

The bar sign, golden bell and 7 symbol are the last icons of the list. The maximum payout corresponds to 1,000 credits, which is already enough to convince many players to keep the reels spinning. But Arcade Bomb also has some surprises in store for everyone.

One Explosive Special Feature on Top

Arcade Bomb is an explosive game that has a unique approach to bonuses. There is in fact only one special feature in the game, but it can trigger chain reactions of big wins on its own.

There are four different bombs available in the game: blue, green, pink and yellow. Every time one appears on the reels, it will lock into position and a countdown will start. Each spin will bring you closer to 0, when the bomb will finally explode and start a chain reaction.

Each of the bombs explodes according to a specific pattern, turning the icons caught in the blast into identical symbols, potentially triggering a big win. Unexploded bomb will detonate as well if they happen to be too close to an explosion.

Big Wins Ahead for the Luckiest Players

Arcade Bomb is a simple yet addictive slot game with a retro atmosphere, very basic rules and a unique special feature that will keep you hooked.

You will need to be a little luckier than usual to really make the best of the bomb feature. Each explosion is full of possibilities, but you could also end up with a very low-paying combination in the end.